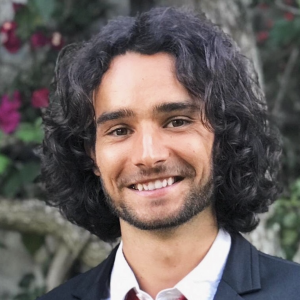 Miguel Macias Sequeira joined CENSE as a PhD candidate in 2021, researching ways to support the sustainable energy transition at city scale. More specifically, his PhD thesis is exploring the role of hard-to-reach energy users in this transition, by characterizing distinct audiences and developing a local-scale support framework which will be piloted in several neighbourhoods of Lisbon’s Metropolitan Area. Before starting his PhD, Miguel participated in project PAS2020, where “Menu de Renovação Verde” was launched, and contributed to project SUSHI. He is currently collaborating in several other research projects at CENSE, including EPAH, HUB-IN, and Ponto de Transição.

Miguel has a master’s degree in Environmental Engineering, from the NOVA School of Science and Technology of NOVA University Lisbon, with a semester abroad at the Warsaw University of Technology. Before joining CENSE, he worked on three renowned organizations, including a one-year professional experience in the Netherlands, covering areas as energy, climate change, circular economy, and water. Returning to Portugal in 2019, Miguel decided to shift his focus back to science.

Parallel to his PhD, Miguel is volunteering for the Local Partnershipof Telheiras and the Municipalities in Transition project, an international initiative which takes place in his home neighbourhood of Telheiras which promotes local sustainability and resilience through community-based initiatives. Aiming for wider societal impact, he is also collaborating with GEOTA, a national-scale environmental NGO, in topics as carbon pricing, centralized solar plants,  and lithium mining in Portugal. As of 2021, Miguel is one of the European Union's Climate Pact Ambassadors in Portugal, seeking to actively engage citizens in climate change mitigation and adaptation.